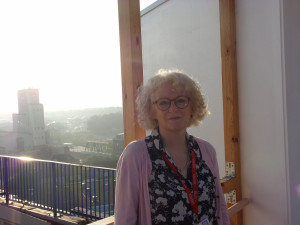 As I enter the box, I turn my back on the more familiar west, the centre of the city, and focus on the less familiar east, the working heart of the city.  I’m drawn to the unaccustomed roofscapes – the chimneys, ventilators, guttering; the textures and shadows of the roofing.

But then the sunrise.  It’s magnificent.  The colours glowing in the sky, reflecting off the wispy clouds and delicate mist are astonishing.  When the first tiny orange dome of the sun appears on the horizon I find myself involuntarily letting out a little gasp of delight.  Then I’m amazed by how rapidly the sun seems to rise which gets me thinking that, of course, it’s actually the Earth that’s spinning rapidly.  I almost topple forward thinking about it.

As the sun becomes too bright to focus on, my gaze is drawn beyond the city to the curved protective arm of Spurn, sheltering the Humber.  The estuary itself starts as a pale gold, turning to silver then finally a delicate minty green.  Vessels large and small seem to meander haphazardly.  The ferry inches its stately passage almost imperceptibly towards its berth.  The appearance of the sun seems to mark a dramatic change in activity levels – as if a bell has tolled to mark the official start of the day.  The traffic, previously a steady drone, seems to roar into life, a siren sounds, chimneys start to belch smoke, the birds are suddenly more vocal – the city wakes.  Moving back across the scene, there are unexpected bands of trees, connecting and dividing built up areas.  I am struck by the number of domestic properties nestled in the heart of the city, close at hand.  Are they awake?  Do they see me?  I find myself wanting to know if someone has acknowledged my presence.

I stand vigil, wakeful, watchful, over the city – a position of responsibility.  Yet I also feel a little vulnerable, visible, exposed.  I feel great love and pride for this, my adopted city, where I have worked and raised my family for many years.  A flinty nugget of a city.

The turbine towers stand proudly, signalling a new future, while in front stands the colourful Drypool, decorated to commemorate Venn, reminding me of the city’s past.

The river and the estuary form boundaries and routes through this space but also provided the inescapable signals to the bombers that brought such destruction in World War II.

But my spirits are lifted by thoughts of the resilient and indomitable nature of this city on the edge.

I came to this vigil expecting to stand and watch in solemn remembrance for those I have recently lost and for those loved ones facing challenges in their lives right now but I leave feeling unexpectedly and delightedly optimistic, hopeful and energised.

It has been a privilege to take part in this stimulating and thought-provoking event. 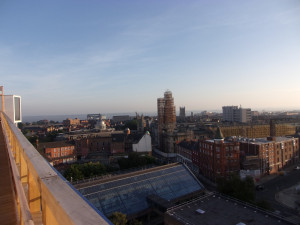