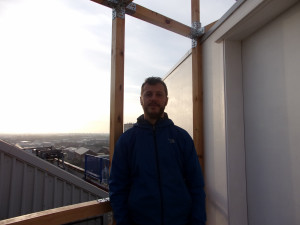 There was no particular thing that motivated me to do the vigil so I didn’t have any preconceptions or expectations.  It sounded interesting.  Awake at a time and a place quite unusual.

I spent the first half admiring the colour of the sunrise, pinks and purples, and noticing landmarks and piecing the city together in a mental map.  After Lyn checked on me and I had adjusted to being there, I was calm and still.  I thought a lot about the relationship between subject and the world.  The mind as space for the world, sights, sound, thoughts, feelings all arising in consciousness, from such a singular position this was lonely and vulnerable.  A jogger looked up and changed that perspective in an instant, a wave and I am a thing in the world again, a face, a head, a man standing in a box on top of a college.  The hello passes, I feel my breath, the scene loses specificity and I return to being space for the world.

Thoughts included a sense of vulnerability, my own and the city’s, scale and dependence too.  Each of us is so reliant on things bigger than us, a vast network of moving parts that we depend on.  Noticing the bus driver who symbolised one small part of that network.  We rely on him to make our city what it is and he, in turn, relies on the city.  A ship arrived and moved silently westward, made me think about the scale of things.  Condensation on the window, a jogger below, a building I can’t quite place, the ship came from where?  The sun has risen about an hour’s worth, the condensation changed as I exhale.  Scale.