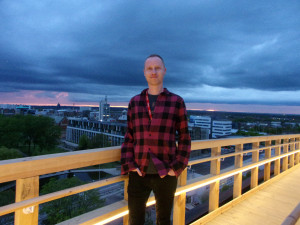 Standing just below the low, heavy, dark clouds I wasn’t expecting the most spectacular sunset – nor the most bustling of cities on a cool Sunday evening.  But despite my reservations, there was something worth seeing on both counts.  As the sun sank, the sky went from a heavy grey to a subtle yet very impressive pink-orange, going down for good with an extra burst of colour!

One of the main things that struck me as I stood in the box was how much my impression of Hull’s scale had changed.  I’d always considered it quite a sprawling city centre but as I stood on its eastern edge, with Hull Royal Infirmary almost seeming within reaching distance, it seemed a very compact space.  But so diverse – having the old, new and in progress all in one field of vision was very special.

The Vigil box itself is a wonderful, relaxing space.  The birdsong, combined with the white noise of muffled, distant traffic put me in mind of a meditation room or sensory deprivation tank.  But then, the occasional burst of activity – a siren, loud engine or laughter from a group in Queen’s Gardens – is a reminder that it’s more than that and I was watching over thousands of people and situations that could change by the minute!