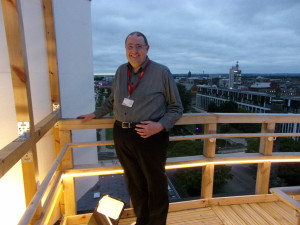 What occupied me the most was observing the skyline from up on high.  I could see the weather vane on the old Hull City archives office and the new extension next door to it.  It seemed strange seeing the tower of Hull Trinity Market apparently on top of the eastern nave of Hull Minster.  Further afield, the roof of the Bonus Arena appeared to merge into Princes Quay Shopping Centre and the roof of the Murdoch footbridge merges into the roof of a red brick building off Princes Dock Side.

Looking east, I noticed the green pyramid of Hull Prison standing out prominently.  You could also see the rear entrance of the White Hart pub on Salthouse Lane and how imposing Alfred Schofield’s House next door is.

The sky was cloudy and very reminiscent of a J M W Turner watercolour.  At times there were strong sun rays which reminded me of a pop concert.

Looking west again, you could see the Brynmor Jones Library at Hull University on Cottingham Road.  There was also an unfamiliar church tower which could be on Princes Avenue.

It was interesting seeing Hull at the same height as the Wilberforce Monument which on its plinth referred to the abolition of negro slaves.

At dusk, Hull Maritime Museum was lit up in purple and at Trinity House School square windows were illuminated in different colours. 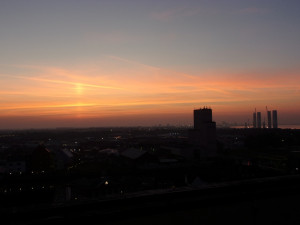 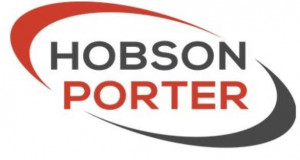 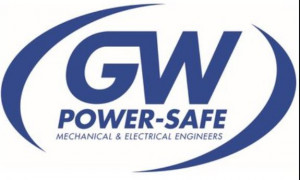