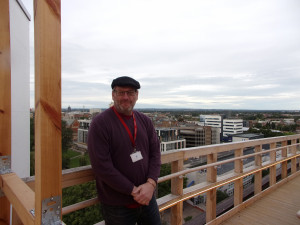 My initial reaction was to sit down but I quickly changed to standing and walking between the windows keeping guard.  Odd but true.

“Something, like nothing, happens anywhere.” – Philip Larkin.  It most certainly does on a Sunday morning in Hull.  Sixty-four cars, three lorries, six bikes, a cat, a rat, two squirrels, a street cleaner and the odd ‘walk of shame home’.  Something is always going on and the deeper you look from above the more general and wide-angled that view becomes.

There’s a poem by Shane Rhodes called The City Speaks which starts, “Words come from a room within a room  . . . so peel away, peel and peel and peel.”  And that is exactly how my Vigil was.  I looked at shapes and areas, I mapped the places I know and pondered the places I don’t.

At sunrise, a church illuminated and dominated my thoughts in it being the brightest building I could see.  Ironic and fitting at the same time and an overarching memory.

Once past the detail of people, places and thoughts, I began to find shapes and colours.  I found a wizard’s hat, a station, a ski slope, a dragon’s tail, a camel and many other shapes and lookalikes.

My journey on the Vigil was nothing like I had presumed it would be, in that it took me beyond watching over the city and into its very heart and rarely to places I thought I would be.

A huge thank you to all involved.  A wonderful project and an absolute pleasure to have been given the opportunity. 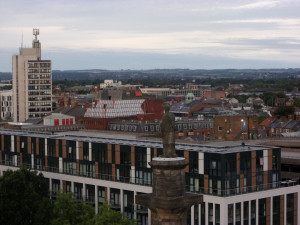