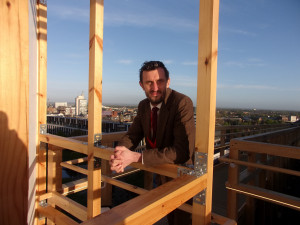 I initially signed up to be a Vigil quite simply to take advantage of the wonderful view across my adopted home of Hull.  As an incomer I’ve grown to develop a love of the city, its history and its architecture.  It was such a wonderful opportunity to survey the city, to create panoramic perspectives and closed-down portrait views – to piece together the city and its buildings – east and west.

In the run-up to my Vigil I was reminded that this is the 80th anniversary of the Hull Blitz – two days of intense bombardment that contributed to Hull being the UK’s second most bombed city.  Whilst standing over the city, I thought of the Air Raid Precautions wardens who took vigil 80 years ago, sounded the alarm and helped, as best as possible, to keep their city safe.  I thought too of the devastation and loss, and how Hull overcame this over time to look forward, rebuild and renew.  This was so evident in the view – bombed sites creating opportunities for innovation and creativity.  We can see this from above – in Hull College, for example and more recently, in the Siemens Gamesa site.

Initially, I struggled with the idea of the Vigil.  For me, I imagined a 24/7 continuous watch over the city.  On reflection, however, I think sunrise and sunset is about right for a place like Hull.  It does not need any more of a Vigil watching over it.  It’s a city that is fiercely independent – that forgotten ‘North-east coastal town’ that is so used to looking after itself, its communities and its residents.

So finally, as I reflect on my Vigil I will remember the views, the buildings, the communities and the people below.  I will think of them rising and going about their business as they start their day afresh – and quite simply, and humbly, I wish them well in their endeavours as they continue to shape Hull in their own image.